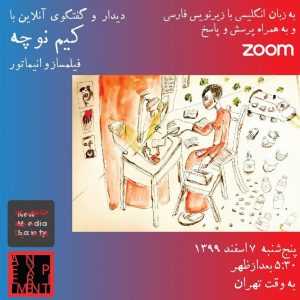 In this online session, we had a conversation with Kim Noce about her latest animation: “Cities of Ladies”.
performance and education.
The presentation was held English with Persian Subtitles followed by a Q&A session moderated by Nairy Eivazy from Animation Experiment collective.

Kim Noce is an Italian artist-filmmaker and animator resident in the UK. Her work has been screened in major international film festivals, displayed in art galleries, broadcasted on major TV channels, on streaming platforms, and won several prizes around the world including Chicago Int. festival, LIAF, LSFF, IFFEST Document Art, Anima, Sopot, and many more. She holds an MA in Directing Animation from the National Film and Television School.
Alongside her personal research, she works for the commercials & broadcast industry. She has been commissioned work as a Director, Animation Director, 2D animator, and compositor on series of productions such as BAFTA-nominated TV series for the BBC; large scale theatre projections for the Weinstein Co and Warner Bros; several commercials, idents, and countless corporate animation pieces
Kim is also currently the course leader of MA animation at London College of Communication at the University of Arts London and a Lecturer for the graduation films at the National Film & Television School, and she delivers master classes around the world. Across her practice, Kim has run events merging her multimedia work through participation, performance, and education.