Skip to the content
Artist Talk with Yasaman Hasani 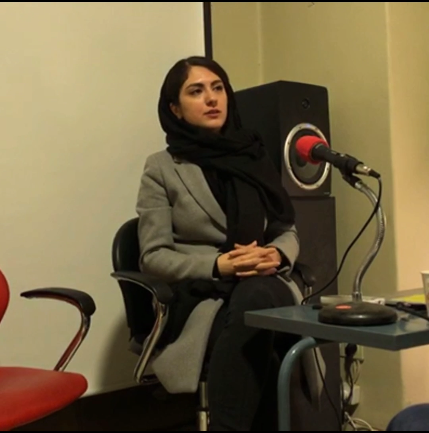 At the 6th session of “Animation; experiment” we had a talk with Yasaman Hasani. Born in Tehran Iran, She is a Ph.D. student at the University of Applied Arts Vienna. she is now engaged with modernist studies and Iranian post-revolution Cinema. Also, her films have received many awards and have international screenings. In the session, she talked us through her artistic life and works. 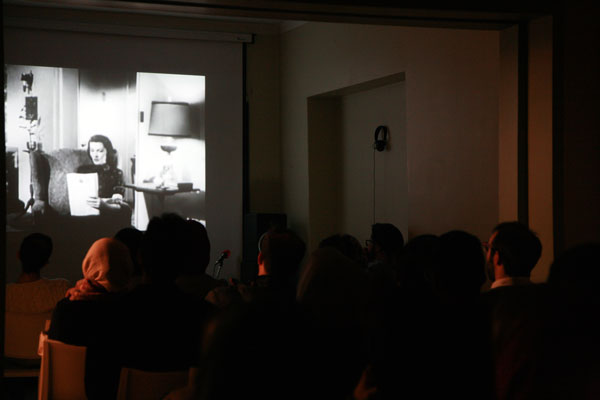 At the 7th session of “Animation; experiment” we had a talk with Yasaman Hasani about Martin Arnold’s (Born in 1959, Vienna) artworks. Marin Arnold is a well-known experimental filmmaker known for his obsessive deconstruction of found footage. Arnold’s artworks have been shown at many international film festivals and exhibitions, including Cannes, Rotterdam, the Barbican Art Center in London, Cinematheque of the MoMa in NYC and the Cinematheque in Paris, and he has won many awards.

Essays on his work and interviews have appeared in several films and art magazines including Afterimage, Cahiers du Cinema and also they have been published in numerous papers including The New York Times, The Guardian and Le Monde. Arnold taught at several universities and art schools such as the University of Wisconsin, CalArts, and the San Francisco Art Institute.

Hassani introduced Arnold and analyzed his approach along with screening the following artworks of him:

Arnold’s films are intensely cut sequences in which several seconds of old movie clips are taken and stretched out into much longer works. His intent is to create, or possibly unearth, narratives concealed within the mundane films from which the samples. In films such as Pièce Touchée (1989) and Passage à l’acte (1993)[1] for example, he uses several seconds of the films The Human Jungle and To Kill a Mockingbird, the latter to create a bizarre story of aggression and tension within a traditional American family.In a recent group of short film loops such as Soft Palate (2010) and Whistle Stop (2014), Arnold seems to discover psychoanalytic underbellies in the most popular form of post-war family entertainment, animation, and its most iconic characters such as Mickey Mouse, Tom And Jerry, Daffy Duck and Goofy. 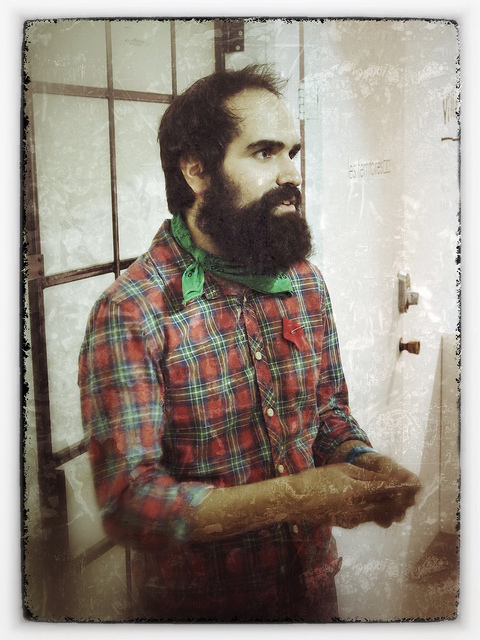 The 13th session was held with the participation of Payam Mofidi, Iranian Artist residents in Canada. In this session, we discussed his experimental films. He has obtained a unique way of narrating and personal style, after years of practicing and experimenting. After that, He explained his experiences and shared his artistic evolution.

Payam Mofidi was born in 1981 in Tehran. He obtained a BA in Graphic Design in 2005 from the Azad University of Art and Architecture in Tehran and graduated with honors from l’Ecole Nationale Supérieure des Arts Décoratifs of Paris in 2009. 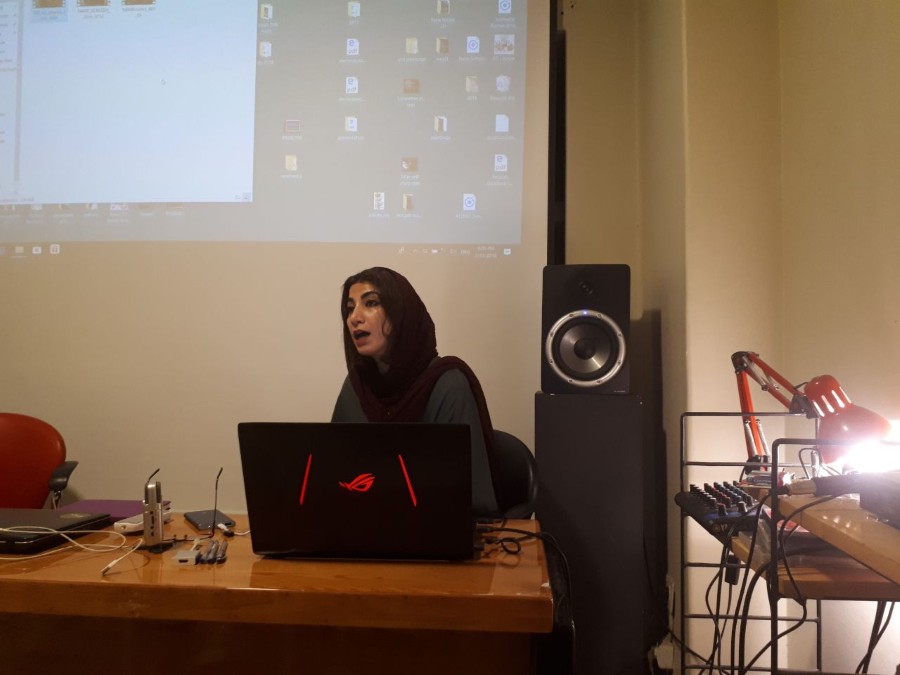 The 15th session was held on July 11th,  2018 at New Media Projects. In this session, we studied the artworks of Setareh Goudarzi, an Iranian artist living in the Netherlands, and talked with her about the experience of working with the Loving Vincent film/animation team.

After receiving B.A in painting from the University of Tehran and M.A in animation from the Tarbiat Modarres University, Setareh Goudarzi went to the Netherlands to study Animation in AKV|St. Joost. According to herself, her struggle in the painting is to escape the pre-fabricated structures of the mind; Creating a position that moves faster than the mind and the subject of the painting is shaped in the process of painting. Moving along the boundaries of reality and imagination, both in drawing and in animation, is her favorite experience.

She explained how she joined the loving Vincent project and the selection process for animators. An animation experience with oil paintings on canvas in a small space specific to any animator has been a kind of meditation. The experience of working in a silent and spatially isolated environment with high workloads has been one of the difficulties of the project over a short period of time. 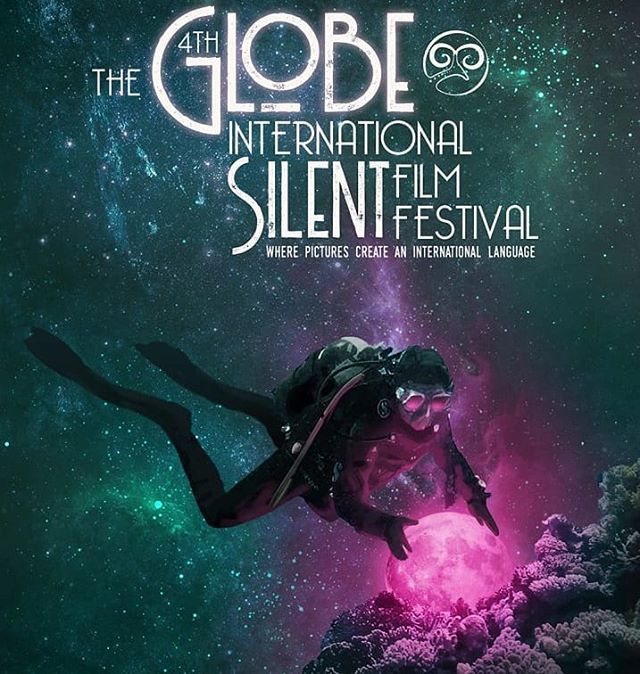 The 16th session was held on July 25th,  2018 at New Media Projects. The guests of this session were the founders of the Globe Festival. After watching a selection of the animations of this festival, we went over to the history of the festival and how it was formed. After this brief introduction, We talked about the importance and role of silent films. The Globe International Film Festival was founded in 2015. The festival is held annually in the academic world of different countries with the aim of keeping silent cinema alive as well as attracting more filmmakers and fans to this pure art. 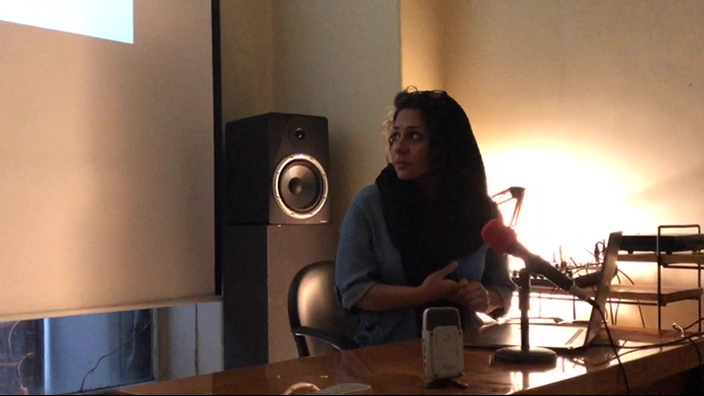 At this session, which was held on August 15, 2018, we talked with Naghme Farzaneh, an independent animation director in the United States. After completing her master’s degree in painting, she began making animations and immigrated to the United States to study in the field. Over the past decade, her films have been featured at world-renowned festivals and numerous awards at many international festivals. One of her films was also named one of the top 10 short films of 2017 by the National Geographic.

Naghma Farzaneh, as a successful director of the young generation who has been working as an animation director with institutes such as TED and ACLU and is currently teaching animation at the Diplal University of Chicago, explains her short film, The Perfume of Candles. She talked about migration concerns and cultural differences, and also how to use animation and images to portray her film. 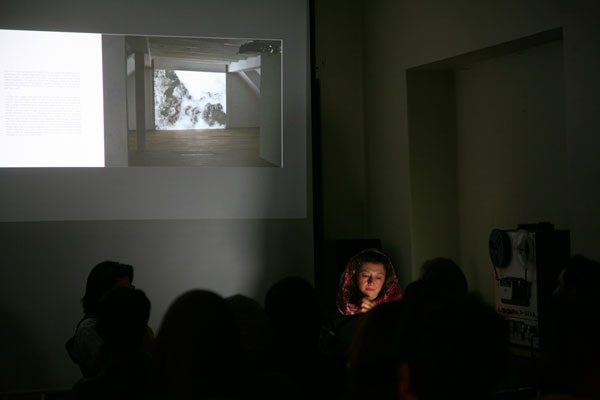 The media artist Tessa Knapp works time-based and cross-genre between location-based installation and video art on language performance, and experimental film and will travel to Iran to hold a guest exhibition at New Media Project and artist talk at Haan Gallery, Shiraz in October 2018.

She was born in 1981 in Stuttgart. She studied media art at the Academy of Media Arts in Cologne and graduated in 2007 with honors from Marcel Odenbach, Matthias Muller, and Siegfried Zielinski.

Since 2005, Tessa Knapp has been represented at exhibitions and screenings internationally, including the Videonale 9 and 11 at the Kunstmuseum Bonn, the Biennale Balticum at the Rauma Art Museum Finland, the Hong Gah Museum Taipei and the Museo Paco des Artes Sao Paulo. They were also presented at festivals such as the New York Video Festival, the European Media Art Festival, the Transmediale or the film festival Max Ophüls Prize. After a working scholarship at Atelier Galata Istanbul in 2009, she received the Zonta Prize of the International Short Film Festival Oberhausen for the video work 99 Beautiful that was also broadcasted on television and became part of the art collection „Kunst aus NRW.In 2016, Tessa Knapp received the Horizont-Raum-Award, traveled to Armenia and Georgia as a scholarship holder of the Women’s Cultural Office NRW and was represented at the Tbilisi Literary Museum. In 2017, Knapp exhibited at the Museum Cavazzen Lindau and developed a site-specific intervention and group exhibition at State Silk Museum Tbilisi, entitled “Museum of Transformation“ presenting a museum of change. In 2018 she presents a new site-specific light installation at Kunstverein Brühl and receives the artist residency of Queens Collective Marrakech, Marocco. Since 2009 she has also worked in many interdisciplinary and participative productions in the fields of performance, dance, music, and sound. Among the collaborations with choreographers, sound artists and dancers a digital storytelling workshop in Nairobi, a play and video graphic music theater for young refugees and more recently a performative work laboratory for voice, language and non-verbal forms of expression. 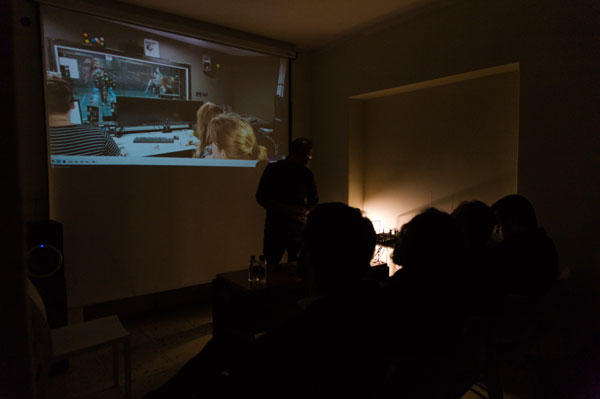 In this session, Hossein Najafi will talk about the effects of experimental approaches on professional animation production.

Hossein Najafi graduated in Cinema MFA from the University of Tehran. He started his career path as a design and animation artist in 1999 when he founded Didar Film, a small production studio, where he produced and directed over 50 TV commercials, managed numerous print campaigns and designed several websites. From 2009 to 2011, he worked with Touchwood Animation in London and Ulkutay Productions in Istanbul.

Hossein Najafi currently lives in New Zealand, where he is finalizing his Ph.D. studies at AUT and working as a lecturer at AUT Digital Design department teaching animation, game, and visual effects courses.

He uses a variety of technologies including Motion Capture, Virtual Human and Advanced Simulations in his practice. His research project is also a practice-led inquiry to bridge between identity theories and narrative forms. 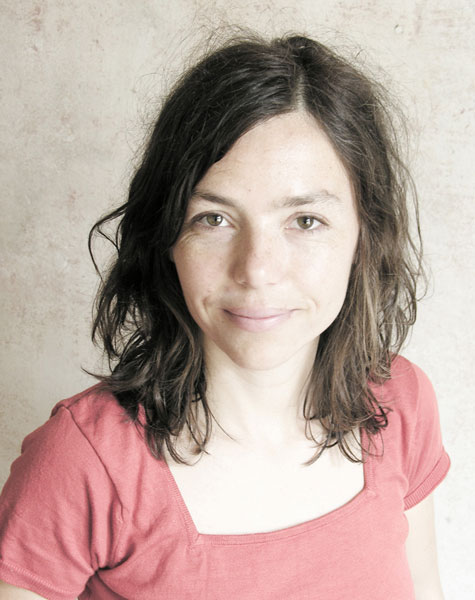 Nikki Schuster (AUT), based in Berlin, works as an experimental animated film artist and sound designer. In 2001, she founded her animated film label “Fiesfilm”

In her films, she mixes conventional stop-action with 2D computer technology. Her award-winning films have been screened at numerous international film festivals such as the 2016 “Anifilm” Trebon (Best Non-narrative and Experimental Film), the 2017 “Tricky Women” (Best Austrian Animated Film) and The “Crossing Europe” Linz 2019 (Innovative Award).

In addition to producing her own films, she also works in motion design for theater, television and for installation exhibitions and conducts workshops for animated filmmaking. She received artistic scholarships to work in Paris and Buenos Aires (2010), in Taipei (2012), in Cochabamba, Bolivia (2014), in Mexico City (2015, 2016, and 2017), La Habana, Cuba (2018) and Tehran (2019).